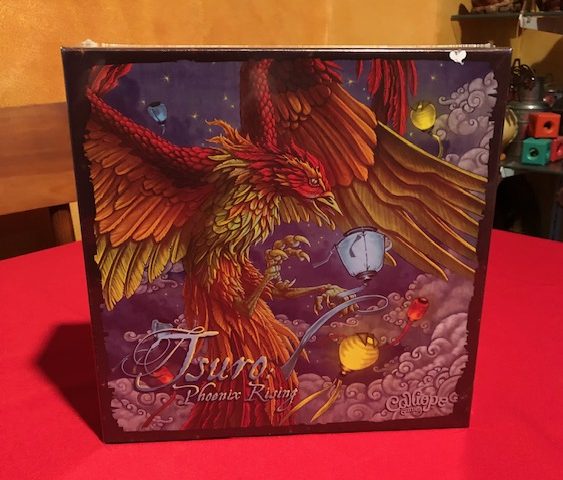 This past December I went out to Tiaga Games, the local gaming store in Marquette Michigan- because that’s where I was at the end of December – and I spied a game that looked Tsuro-ish but wasn’t the brown of Tsuro or the blue of Tsuro of the Seas. It turns out that there is a new Tsuro in town: Phoenix Rising. I like me some Tsuro so I walked out of the store with a lighter wallet and a new game.

The one problem with Tsuro, the original, is that after a while it can become a game of “I’m trying not to fall off the board before you fall off the board”. Assuming you don’t smack into someone and end both your games that way, the endgame of attrition can wear on a player. Tsuro of the Seas addressed this by adding a dragon that ate your pawn, and a typhoon that ate tiles, including any that had pawns on them. I appreciated that Calliope Games added some new elements but we decided that there was just too much change happening with Tsuro of the Seas.

Tsuro: Phoenix Rising fixes the “Fall off the edge of the board last” problem by introducing an actual end goal which isn’t “Last pawn standing”. While you are traveling your path, you have opportunities to pick up lanterns, which then turn into stars (the lantern pieces are placed back on the board in different locations). You win the game by collecting 7 stars and becoming a constellation. Another neat twist is that the paths on Tsuro: Phoenix Rising can end abruptly at another tile. This is perfectly fine, you stop your turn but on your next turn you can flip or rotate the tile you are bumped up against until you path continues.

Mind you, you can still shoot off the edge of the board, or crash into other players but! Tsuro: Phoenix Rising has an extra life for just this situation. You get one chance to rise from the ashes of your unexpected demise and keep playing. 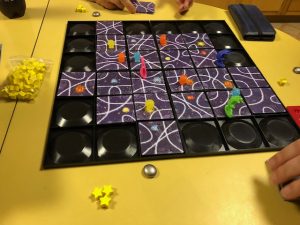