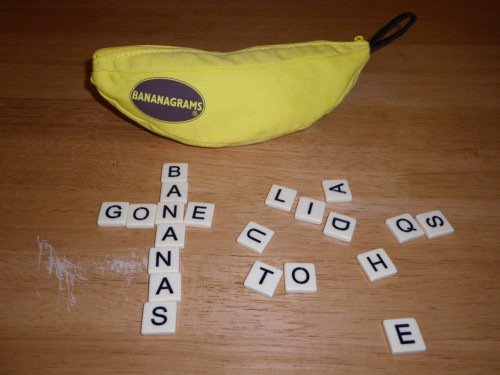 How about a nice game of Bananagrams?

What is it?: Bananagrams is a game by Bananagrams in which players try to use all their letter tiles to build a free-form Scrabble-esque tile grid.

On a scale from Preschool to Post-Doc, how hard is it to play?: There are no official age restrictions but you do have to know how to spell (in English if you are using the English Bananagrams set. You can also get Bananagrams in Spanish, Hebrew, French, Italian, Norsk (Norwegian), or German and I suppose you would have to know how to spell in those languages if you were playing with any of those sets).

What will it cost me?: Bananagrams does not sell Bananagrams directly, but it looks like you can get it anywhere from $15 (Fat Brain Toys, Amazon) to as low as $11 if you shop around a bit.

How many can play?: The rules list set-up options for two to four players, five or six players, and seven or more players. There are also rules for solitaire game play. Technically speaking, you could have up to 12 players (144 tiles/11 pieces per player plus at least n draw pile tiles where n is the number of players playing) or if you play the version where you don’t draw any tiles after the initial deal, the game supports 13 players. I expect that Double Bananagrams allows for more players, so table space probably becomes the limiting factor. I’ve not played the solo variant of the game (it’s basically “get a timer and try to use all the tiles faster than before”) but two people is a good minimum number since there is not a lot of direct competition when you play.

How long does it take to play?: There are no times suggested, other than a reference that a hand can take as little as 5 minutes. On average I’d say 10 minutes seems about right for game play.

What do I need to play?: Bananagrams! And the ability to spell. 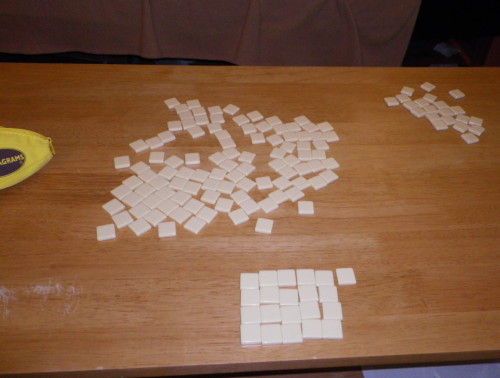 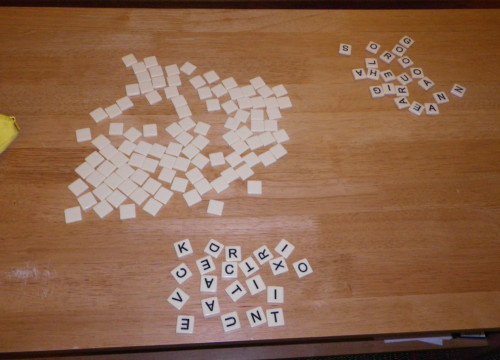 Play starts when anyone hollers “SPLIT” after the 21 (15/11) tiles have been dealt. At this point, all players flip over their tiles and link words together in a Scrabble board or a crossword puzzle fashion (words reading left to right and top to bottom). Each player works on their own grid at their own pace until all of the original 21 (15/11) letter tiles are incorporated into their grid. You can rework any or all of your words in order to fit all your tiles into the Scrabble-crossword puzzle grid you are building. 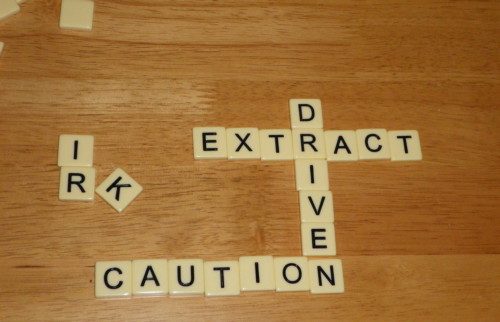 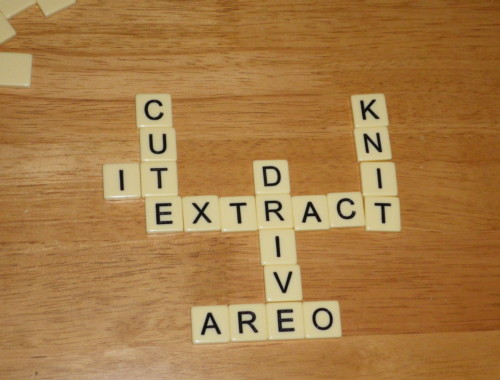 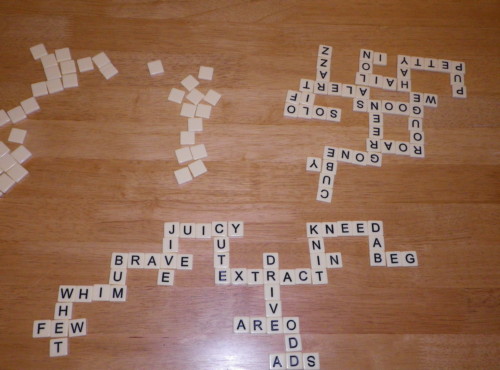 Once you use up all your tiles in your word grid, holler “PEEL,” signifying that you are going to be drawing a tile from the draw pile in the middle of the table (or playing surface). Everyone else must also draw a tile whenever a player says “PEEL” regardless if they have used all of their tiles or not.

If you have a letter tile that you cannot use or do not want, holler “DUMP” and put that tile back in the draw pile face down and draw three more tiles to replace it. 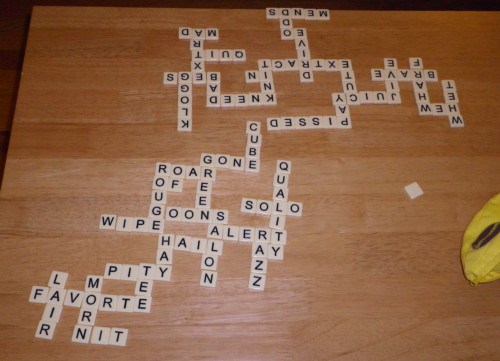 When there are fewer letter tiles remaining in the draw pile than there are players playing, the first person to use all their tiles in their grid hollers “BANANAS” to win. Other players are free to contest any word in the winning player’s grid but if you do, make sure everyone agrees on the official source you will use to look up these words. If the winner’s grid is good, they win. If the winner has any mistakes, they do not win and their grid is returned to the draw pile (face down). Play resumes until one of the remaining players can call “BANANAS.”

As a side note, if you rework a significant portion of your grid, try to remember to clear all of the word if you have cannibalized portions of it to fit other tiles. “EO” sorta slipped under the radar after I yanked “AE” to use elsewhere. I’m not going to talk about KLOGG except to say that it seemed like a perfectly good word at the time.

Would you recommend this game?: If you aren’t a strong speller (hi!) this game is probably not for you. Personally, this is not my favorite game on the shelf – mostly because I am a notoriously poor speller and my friends are all very good spellers with broad and deep vocabularies. On the other hand, if you are decent with spacial arrangements and a mediocre speller, this game might be more fun than not. Often times you have to be willing to sacrifice parts or all of your word grid to squeeze in those pesky remaining letters so if that sort of thing is your strong point it can overcome a lack of spelling skills. If you are great at both I don’t want to play with you.

My other pet peeve is the action wording. The English language has perfectly good words for “Begin the game”, “I’m taking a tile and so must the rest of you”, “I am stuck with this horrible tile and will be putting it back into the pot while incurring a penalty of three extra tiles” and “Oh look, I have satisfied the winning conditions!”. I’d choose “Go”, “Draw”, “Trade” and “Win” but Bananagrams wants you to use “Split”, “Peel”, “Dump” and “Bananas”. I’ve played this game several times now and I still can’t figure out what I’m supposed to say when I want to do an action. I hate this sort of cutesie nomenclature.

On the other hand, my directions are also printed in Spanish so theoretically I could say “Partir”, “Pelar”, “Tirar” and “Bananas” and it would be just as valid (except for the part where I don’t actually HAVE a Spanish Bananagrams set. Details…). As long as I can’t remember the action words, I might as well not remember them in Spanish but sound cooler doing so. “I need a tile so PELAR y’all!”

Spelling and confusing action words aside, this is a fairly fun game and it comes in an exquisitely cute package. BANANAS!