burtonja Posted on September 12, 2012 Posted in How to Play 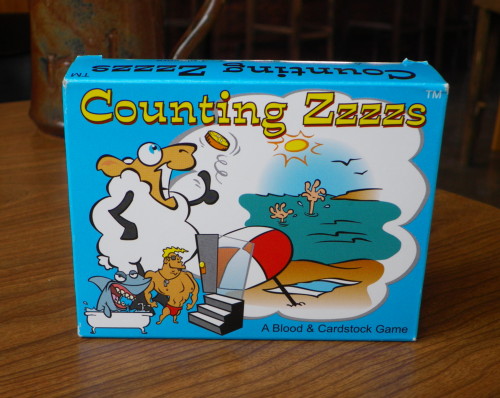 How about a nice game of Counting Zzzzs?

What is it?: Counting Zzzzs is a card game from Blood and Cardstock Games where the players try to score the most points in their “dream.”

On a scale from Preschool to Post-Doc, how hard is it to play?: The Official Age is listed as 10 and up. Can younger people play it? I’m not sure a game of all 8 and 9 year olds would go very well at all, but certainly a mixed generation family or friends could play this with no problems. It’s been a while since I’ve been an impressionable 8 or 9 year old, so parents or stewards of younger kids might want to go through the deck first to see if some of the scarier pictures might be too scary in a game about dreaming.

What will it cost me?: Blood and Cardstock Games sells Counting Zzzzs for $19.00. I think I got my deck for a couple dollars off when I picked it up at a convention.

How many can play?: Officially, two to four players. Again, with the two-player game, there is only the other player to play cards on, which I find more cutthroat than three or more players. You could probably play the game with five or six, but the card supply won’t support many more.

How long does it take to play?: There is no time range listed in the rules but we’ve played two-player, three-player and four-player games and they tend to clock in around 40 to 50 minutes.

What do I need to play?: A deck of Counting Zzzzs and some sort of method for keeping score.

How do I play it?: Blood and Cardstock Games has the rules online here and below I have words and pictures that say pretty much the same thing, only with prettier live action-y shots.

To decide who goes first, determine whose alarm is set the earliest for work. In the event of a tie, use your favorite method of tie breaking to determine the first player. Play proceeds clockwise thereafter.

Deal out a hand of five cards to each player. 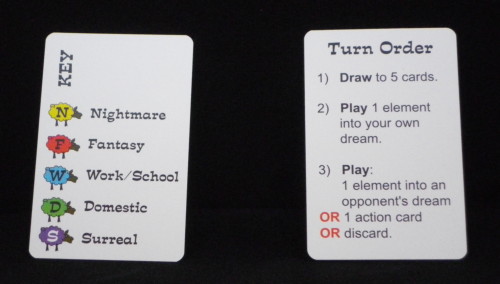 You may also want to have these handy. They are double-sided reference cards; one side has the sheep key (Dream Themes), the other side has the basic rules of play. There are four reference cards so that everyone can have their own, but we usually just pull two and have one flipped to the rules and one flipped to the sheep somewhere in the play field.

The object of the game is to get a “good night’s rest” by building a positive score dream. To do this, you need to build your dream out of Dream Elements. There are four kinds of Dream Elements:

People (bordered in light blue). Notice that cards can come with positive values, no (or neutral) values, negative values or with both positive and negative values (Context cards). All elements have some of each type of card and some cards have synergy bonuses if played with other cards (it will say on the card what other card gets bonuses). In this batch, the Doctor is +2 points but if you also have the Nurse in your dream you’ll score an additional two points.

Places (bordered in light green). Element point values (for all Dream Elements) range from -5 to +5.

Things (bordered in orangish). Open Door/Locked Door should have sheep along the side of it but doesn’t due to a misprint. Count it as having one of every color sheep. Also take heart, if you have the Serial Killer (-4) and the Chain Saw (-3) in your dream you get a synergy bonus! A nightmarish +2 to the whopping -7. Yay?

Verbs (bordered in purple). Note that all the Element cards (People, Places, Things and Verbs) have some sort of Theme (sheep) associated with it. For instance, Dancing has Red, Green and Purple Sheep, which means that Dancing is a dream element that can be either Fantasy, Domestic or Surreal. 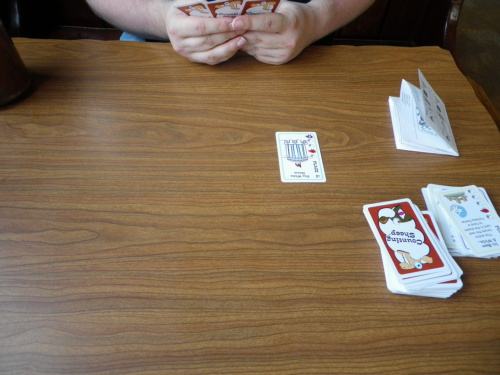 Play
The first thing anyone does on their turn is to draw up to five cards and then play an Element card from their hand into their dream. If this is either the first play of the game or the first play after having “woken up” this will be the only card (so far) in the dream. Until a card is set down on an empty playing field, that player is not dreaming and therefore is not playing at the moment. If a player is not dreaming (has no Dream Element cards in front of them) then the other players cannot play cards on that player. I’m playing against Matt, who got up first that day, so he can only play an element in his dream and discard, as my play field has no dream yet.

If you play a Context card (an Element card with both a positive and negative value printed on it), play it sideways in the dream. You won’t know until the dream is scored whether that card is good or bad. Am I and a Salesman having Beers Underwater in a tranquil Green Forrest or a horrible Dark Forest? Only time will tell!

If the dream has a Element card in it already, then you may add to your dream by placing another Element card next to the existing one. The second Element card must match at least one of the Dream Themes (the sheep color(s) must match) but cannot be the same Element as the previous card (the borders of the cards must be different). 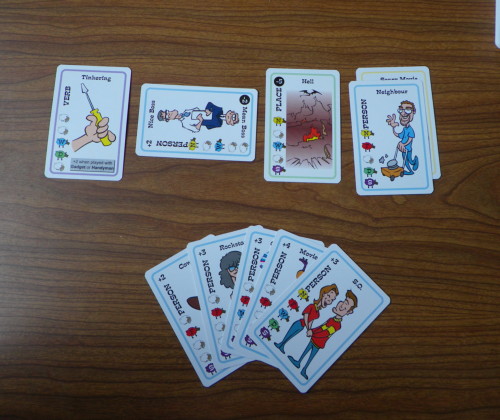 If you have no legal plays to place in your dream, show your hand to the other players. Discard your hand and dream (scoring it if appropriate – addressed below). This ends your turn. In the above pic, my last dream element was a person and all I had in my hand were Person cards so I “Woke up” and had to discard the dream.

After you have placed an Element into your dream, you then must play a second card. You can add an Element to another player’s dream (provided the Themes match and the Element types don’t and they have at least one Element card on the play field), or you can play one of the Action cards…

Action cards (bordered in light yellow) come in Wake-ups, Benders, Forces and Blocks. What they do is detailed on the card.

In my “Fairy Godmother who has a penchant for planting Palm Trees in either the Grand Canyon or a Gaping Chasm” dream, Mansion is sitting on top of an Action card. This particular Action card that Matt played on me required that the next element in my dream have a specific Dream Theme (sheep color). Fortunately, I had Mansion in my hand, which seemed to fit the bill.

Play continues in this manner until you are “woken up” by either drawing a hand in which there are no legal moves to play into your dream, an Action card is played on your dream that wakes you up (and you have no card to counter the wake up) or the dream reaches 10 elements. When any of these actions happen, the cards are scored (see below) and then placed into the discard pile. If the endgame criteria have not been reached, start another dream on your next turn. 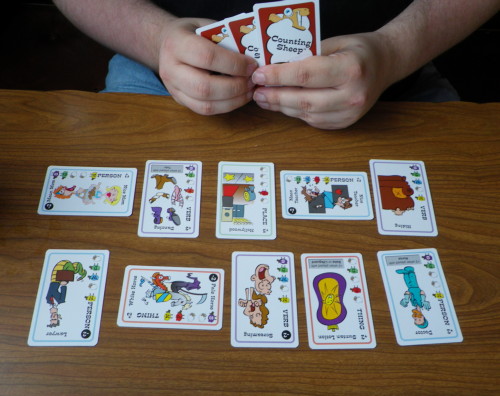 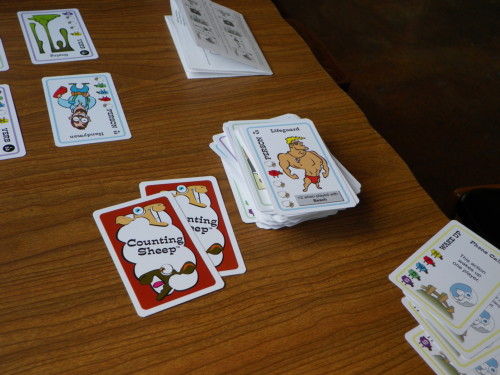 Endgame Criteria
Play continues until one player reaches 40 points (or 40 winks. Wink wink, nudge nudge) OR the draw pile is exhausted (signifying the night is over and everyone’s got to get up). When the last card of the draw pile is taken, the game ends immediately and the player who drew that card does not get to finish their play. Everyone scores their dream regardless of how many elements it contains (the only time four or fewer elements can be counted towards a score). Whoever has the highest overall score wins. 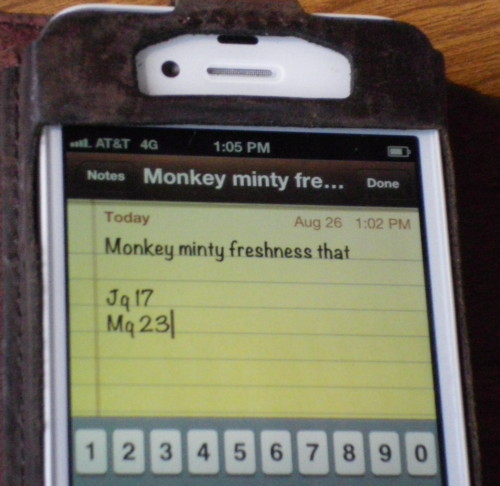 In a two person game the scores don’t tend to get very high since you are always trying to sabotage the other player. You may have noticed that for this How To, my endgame pic is the last two cards in the draw pile. Most two-player games tend more toward ending with the last of the draw cards because of the nature of scoring and two-player playing. I played a couple hands with the game developer (and two other people) that ended in a score of 40 so it can happen that the game ends with a high score. Usually, dreams score higher when there is more than just one other person playing. Don’t ask about the monkeys, they just sort of appeared as a note when I fired up the iPhone.

Would you recommend this game?: Half the fun of this game is trying to reconcile the dream Element cards with a logical narration. The instructions suggest that players narrate their dreams as they go and I have to tell you, it’s a hoot. The one thing I’ve found that people get hung up on the most is the “Must match a theme, must not match an element” rule. It wouldn’t seem that hard but so far, every game has had a couple of “AHA! Oh wait…can’t play person next to a person” moments or that sinking feeling when you realize your awesome move isn’t legal because the sheep don’t match. Other than that, this is a surreally fun game.