burtonja Posted on September 26, 2012 Posted in Events, How to Play 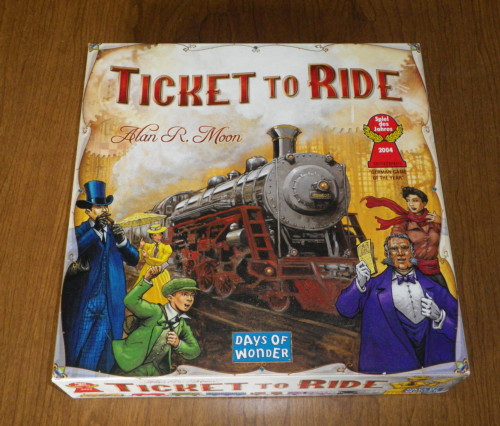 How about a nice game of Ticket to Ride?

What is it?: Ticket to Ride is a board game by Days of Wonder designed by Alan R. Moon wherein players try to earn the most points by completing train routes.

On a scale from Preschool to Post-Doc, how hard is it to play?: The official rules state “ages 8 and above” and that seems like a good range. Ticket to Ride is a game that takes some time to play and involves some strategy so take this into account if you think maybe your 7 year old or younger might want to play.

What do I need to play?: Ticket to Ride.

How do I play it?: The official rules can be found all neatly tucked onto a pdf here but as long as you are reading, I’ll explain the general gist of the game. 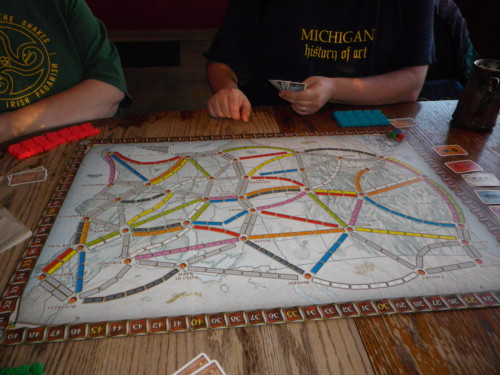 Set-up: (Apologies for the upside-down U.S.) Everyone starts out with a pile of 45 colored train pieces (black, red, blue, green, or yellow) and a scoring marker in the same color. The scoring markers should be placed on the “Start” square located on the numbered track around the board and will be advanced to the appropriate number as the game progresses and points are accumulated. 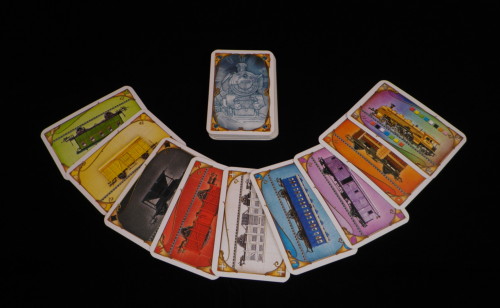 The Train Car cards are your hand, keep them hidden. 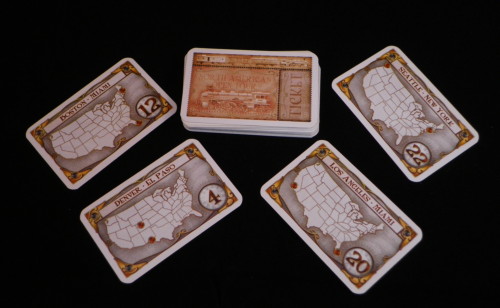 The Destination Ticket cards are your goal(s), keep them hidden as well.

Before actual play begins, each player looks at their Destination Ticket cards and decides which ones they will attempt to complete. You are allowed to discard one of the three Destination Ticket cards if you choose, or you can attempt to complete all three. Decide who goes first by determining who is the most experienced traveler in the group. Play proceeds clockwise thereafter.

Start of Play: On your turn you can either: 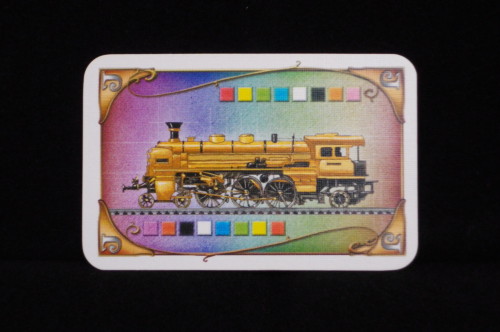 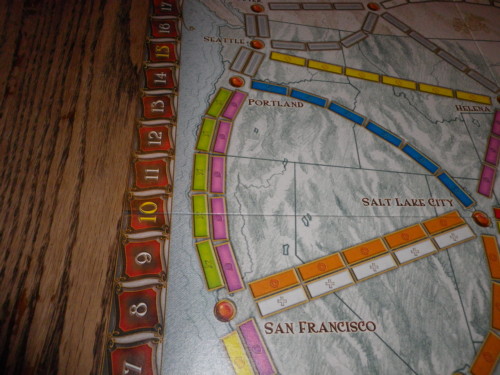 Some Routes, like Portland to San Francisco, have two sets of track that run parallel to each other from city to city (a five section of purple and a five section of green). One player can not monopolize both Routes to the same destination and in the two and three player games only one of the two Routes can be claimed. 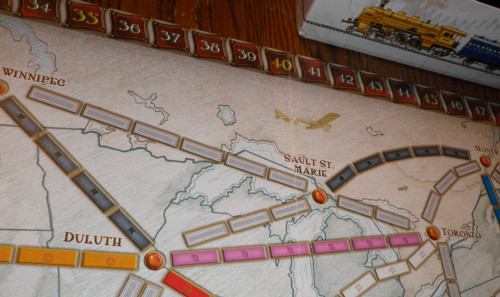 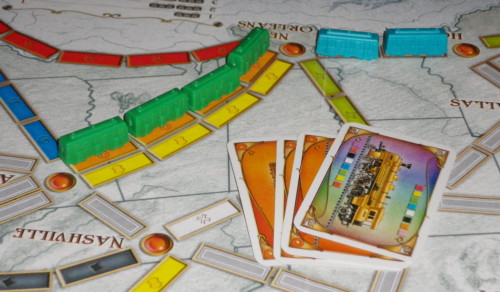 I have decided to claim Atlanta to New Orleans with 3 orange and one locomotive Train Card. 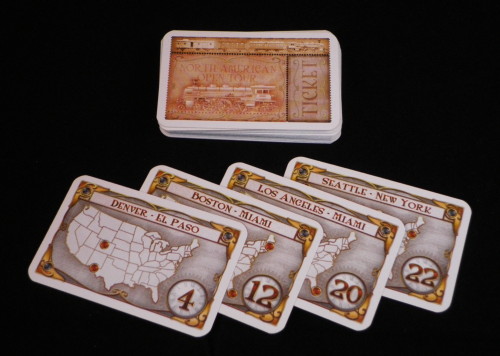 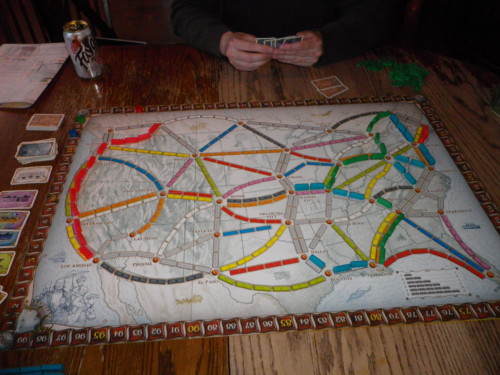 Dort, Matt and I in media res.

Endgame criteria: When any player has used all but two (or one or zero, depending on how Routes are claimed) of their train pieces, the end game is triggered. All players get one more turn after that and then scores are tallied.

Scoring: Throughout the game, players get points for claiming Routes. 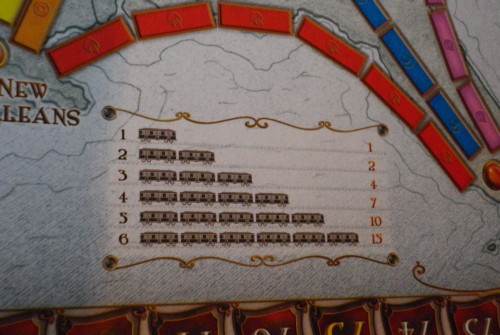 The scoring matrix for claiming Routes is printed on the board so every time you claim a Route, be sure to advance your scoring token that many spaces on the numbered ring around the edge of the board.

Would you recommend this game?: I absolutely would. I have a friend who is the super regional solar system champion of train stuff (or something close to that anyhow) so I asked her one day, “What was up with this Train Game thing?” As it turns out, there are several train games, but Ticket to Ride seems to be one of the easiest ones to play. So I went and signed up to play Ticket to Ride (I was at a convention at the time) figuring I’d learn how to play and things would be peachy. Little did I realize that I accidentally signed up for the Ticket to Ride tournament and no amount of weaseling or pleading utter blithering n00biness would get me out of the tourney. The train game peeps simply sat me down and we played for a quick 15 minutes before the tournament began and then they tossed me into the deep end. It was AWESOME! Seriously, I did not lose my first game by a bajillionty points which is what I was expecting. Instead, it was a really tight game and it came down to who had the longest continuous path of routes to determine a winner.

Ticket to Ride combines strategy, luck and ease of play really nicely. Heck, you can be tournament ready in just 15 minutes from having never even seen the game (OK, I confess that my tournament mates were about the same level of competent as I was but still…the mechanics are pretty simple). I’m not sure I’d enjoy playing with my friend, the regional awesome train maestro because I expect she’d skunk me every single time and there IS no mechanism for skunking in Ticket. However playing with players at my neophyte level of skill would be fun and entertaining. 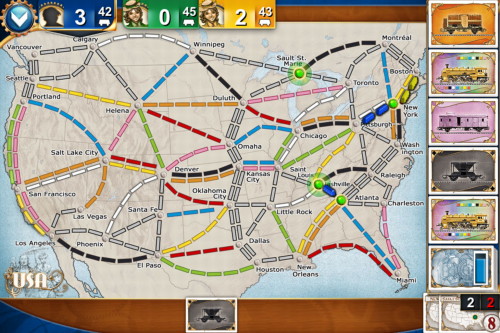 (iPhone Version)
Even better (and cheaper) than the board game, but not as socially entertaining, you can purchase Ticket to Ride for the IPhone or iPad (we have both). It’s a $1.99 purchase through iTunes and I have to say that I might be addicted to this app. Unlike the full board game, the app is very portable and awesome for getting in a little train game action on the go. The Ticket to Ride app also takes considerably less time to play; perhaps 10 minutes a game if you are playing solo. There is a “Pass and Play” option as well but that takes a wee bit longer. 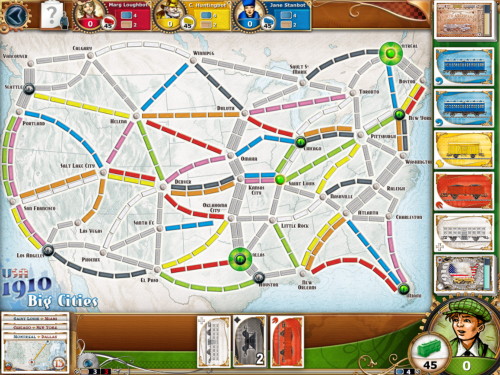 (iPad version)
The other advantage to the app is that it will highlight your end cities on any Destination Ticket if you ask it to. If only my eyes could do this in the real game I’d be set (and also maybe a touch spooky). The down sides are that the AI players aren’t all that clever (actually, at my level of play I find that a perk) and it’s a bit difficult to see immediately how many train pieces are left on any given player, including yourself. The iPad and iPhone games are laid out slightly differently so some of that confusion might be switching platforms but I think it’s still easier to look at a pile of train pieces than to remember which number represents trains on the AI portraits (and which is your own number).

Possibly the best path is to purchase the app and then become addicted to the game such that $50 doesn’t seem that big a commitment for all the fun and entertainment Ticket to Ride gives.

Register for the convention and sign up for Ticket To Ride events.