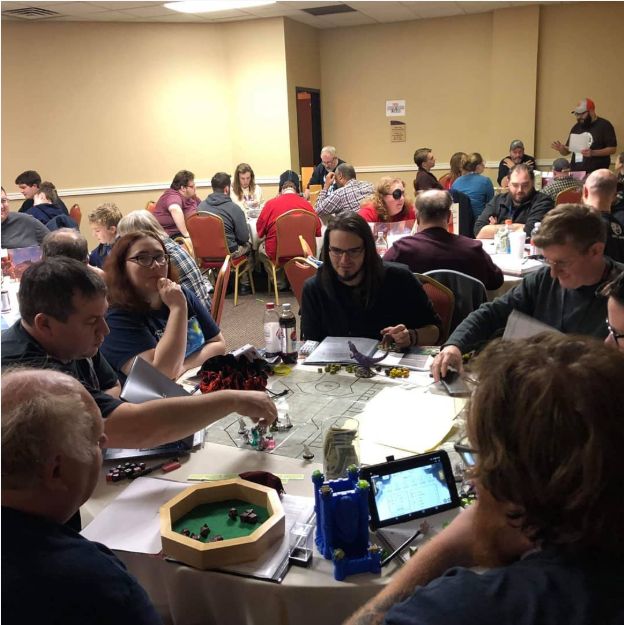 Have you ever wanted to play D&D but found it difficult to coordinate schedules with your friends to play on a regular basis? Have you gotten really involved in a game to only have the DM cancel due to a new work schedule? Or have you had an amazing character that you loved that you had to leave behind when you moved? Or have you ever wanted to play your amazing and beloved character at a convention game with folks you’ve just met?

Organized Play is the answer, and U-Con provides OP campaigns for several different systems. For Dungeons and Dragons, the official Organized Play campaign is Adventurers League. and we’ve had a happy home at U-Con for years. Our close-knit community is built up of groups from many local stores as well as folks travelling quite a distance to check out U-Con. (See if you can pick out all of the t-shirts from friendly local gaming stores and conventions!)

This year, we’re providing brand new, AL legal “community created content” written exclusively for U-Con, “The Goat Mayor” and “Rescue Down Under!” We are also highlighting some other local conventions, with two adventures written for Bardicon, and several that were linked to the charity Jasper’s Game Day.

We also have some previews of adventures not yet available to the general public, including some from the previously super secret “Project Cookie Bag” (which we now know is actually named Pipyap’s Guide to All of the Nine Hells).

All this in addition to other fun events, like Fai Chen’s Trading Post where you can engage in fun activities with your character’s downtime between adventures, buy pets, or trade in magic items for something that fits your character better.

And on Saturday evening, we will have the Epic, which will be a multiple table interactive event that you can only play at conventions!

The entire event will feature $1 rerolls, with proceeds going to the charity Jasper’s Game Day. If you hate your roll, you can give money to a good cause and maybe save your high level wizard from a failed saving throw.

And of course, we’ll have so many tables of D&D that you can fill your entire weekend with it if that’s your thing.

Since it’s part of the AL campaign, when you’re done, you can bring what you’ve gained at U-Con to at any other location that also uses AL rules, whether that be a home game, store, or another convention!

Join us, it will be a lot of fun!  For more information, check out the AL website.

Nick runs U-Con's social media. He got re-involved with board gaming when he found a mostly intact copy of HeroQuest at a garage sale. He started volunteering at U-Con in 2015. His current favorites are Bunny Kingdom, Viticulture, and Star Realms, but he's always looking for the next great game.