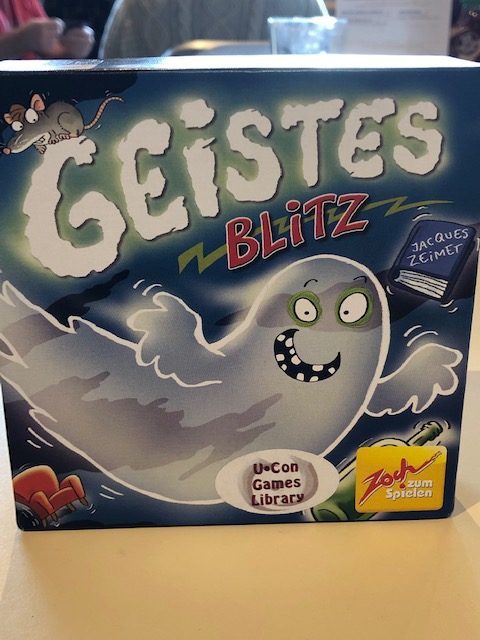 I originally ran into this game at Ye Olde Origins Game Faire (where it was Ghost Blitz) but it sold out before I could grab a copy so I hopped on to Ye Olde Amazon and picked it up for the Games Library. When I opened my Ghost Blitz package I found this: Geistes Blitz.  Someone at Amazon must have been dual lingual German/English and thought, “Same thing, here ya go!” It does have a set of English directions and since I too can read German, I just added it to the Games Library and thought nothing more on the situation.

Pro-tip: Not everyone speaks German so when the people packing up the Library are stuck looking for Ghost Blitz (because I hadn’t changed the Games Library roster to read Geistes Blitz) and can’t find it, they *will* get cranky.

So. The Game with the Ghost (which is the same game whether yours says “Ghost Blitz” or “Geistes Blitz”). It’s a fairly simple game for 2 to 8 players that involves 5 different colored objects and a stack of cards depicting 2 of those objects. Apparently your Ghost/Gheist (the singular form – Geistes being the possessive construct letting you know that the game is the Blitz belonging to the Ghost…versus the Blitz belonging to the Chair or the Blitz belonging to the Bottle- I suppose) took a bunch of pictures and screwed up the color palate. Most of the cards will have 2 objects that aren’t the same color as the actual objects out on the table and the players must figure out which of the 5 objects isn’t pictured in shape or color and grab it. The person with the object gets the card and the person with the most cards at the end is the winner.

Occasionally there are cards that have an object that is the right color and in that case, you would grab the object that is depicted as it actually is. This is harder than it looks and gives the game a little added depth. Also, it hurts my brain a lot.