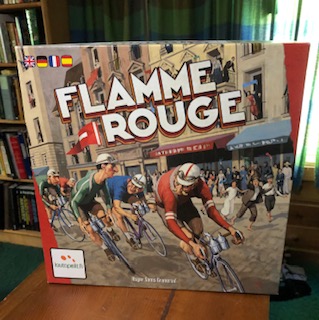 We ran across this game at WorldCon 75 and it looked intriguing-a little like FormulaD gone green.  We like FormulaD and we like bicycles so we thought without knowing anything more about the game, that it looked fun. We decided to pick up a copy and then we realized we would have to pack a standard sized board game in our luggage when we flew back to the states. Needless to say, this is our most well traveled game and probably, our most well played game (Don’t mention that around Sentinels. It gets touchy).

Unlike FormulaD, Flamme Rouge comes with separate track pieces you put together to make a complete route. They have little design cards for hints or you can randomly put tracks together or, if you are a bit geeky, there is an app that will generate tournament courses https://apps.apple.com/us/app/flamme-rouge-companion/id1205427528 If you are super geeky, you map your Flamme Rouge pieces to existing roads and run a Tour de Ypsi event at U-Con. 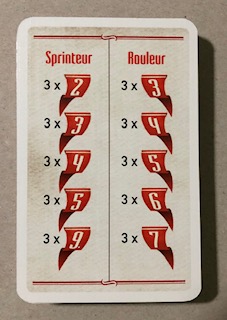 Flamme Rouge is played with a 2 man bicycle team: a Sprinter and a Roller.  Each has a deck of 15 cards that determines movement; the Sprinter’s deck being stacked with more high value cards as well as more low value cards (for a total of 60 movement points) and the Roller’s deck stacked with a better midrange (minus the high and low card values)and a total of 75 movement points.

Every round, players choose cards for each team member and place them face down until everyone has selected cards. There is a simultaneous reveal and movement begins with the lead cyclist and moves back through the pack (or Peleton). Once everyone has moved (or hasn’t because you can be blocked by a particularly crowded section of the track), drafting can take place.  Cyclists get to move up one space to directly behind another cyclist if the conditions allow drafting. Then, when everyone is where they are going to end up, exhaustion cards-which count as a movement of 2 in your deck-are handed out to any cyclist in the lead, either of a pack or out on their own.  At the end of the round, all the movement cards played are removed from the game and the next round begins.

The track itself has some interesting features. The base game has uphill and downhill pieces which have different rules.  Like in real life, uphill sucks. You can’t draft and the fastest you can go is a 5. Even if you play a 7 or a 9; if any of that movement ends up on an uphill, it reduces the entire movement to a 5. Downhill is a bit of the opposite. You can draft and the minimum speed is a 5. This is an excellent time to play any of those exhaustion cards that can clutter up your deck. If you happen on the Peleton expansion, you get cobbles and one lane track pieces to contend with (along with a 5th and 6th player – I highly recommend getting this expansion if you just have the base game). Lastly, you can build a track that is longer than the total of all your movement cards so sometimes you want to pick up a few exhaustion cards. Or you could be that biker on the side of the road with no movement cards left while everyone else whizzes by. Your choice. 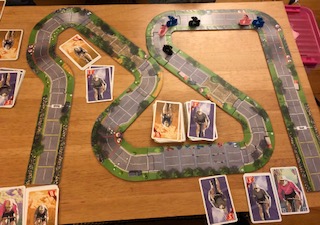