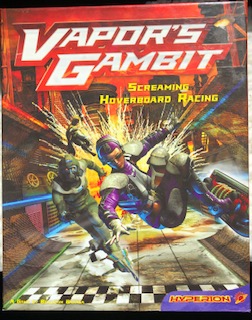 This game has history. I guess in 2004, Hyperion Games…or Origins Game Fair…or maybe the universe in general had a decimal place ordering error. Instead of X number of games arriving at Origins for the usual showcasing, X times a non insignificant number of these games showed up in the dealer’s room. At the beginning of the con it was pretty cool to buy a game and Hey! Get a FREE GAME! Then, the next day it was just Hey. Free Game. And then people had time to play it and they started giving away their free copies for free (hey? Free Game?).  By Sunday there were still quite a number of unclaimed copies of Vapor’s Gambit and you were willing to pay extra to *not* take one.

I will give Vapor’s Gambit props, it has a really cool premise. Everyone is one of — or a team of — competing hoverboard racers in the town of Vapor. The Gambit is a hoverboard race where the players move full throttle through the track with a goal to be the person who finishes furthest across the finish line once 3 laps are completed. You do have some tricks up your sleeve; you can throw obstacles down as hazards for the other players or you can use boosts on yourself. Each team also has a special ability they can utilize once per lap so in theory this should be a whole lot of fun. Can you imagine how chaotic and awesome FormulaD would be if you only had the use of the D20 and you could throw down hazards in front of the other players?

Your best bet is to just grab your copy of FormulaD, pack away all the dice but that D20 and toss hazards on the track every turn. That would be what Vapor’s Gambit should have been plus the cool metal player pawns (VG does have that over FormulaD). The problem with Vapor’s Gambit is that with 8 track pieces, you can only make a track that is a circle or a slightly extended oval. It’s not enough room to really get into the chaos and destruction (Screaming! Hoverboard! Racing!) that the game talks about.

Having acquired 3 copies, not entirely voluntarily, I can tell you that 16+ pieces of track start you with a good variety for some Screaming! Hoverboard! Racing! action. I’m not sure I’d go so far as “Screaming!” but it’s a far cry (HA!) from the base game’s “Loud inside voice” Hoverboard. Racing.  Maybe a two game amalgamation upgrades the slogan to Yelling Hoverboard Racing…I’ll give Vapor’s Gambit that much. The great part about needing a second copy to make this game worth playing is that the market was so flooded with Gambits that you can pretty easily pick up a second copy for really cheap on used games sites.  You might also check out your local game convention’s auction if they have one and bid low.  Heck, I’m willing to sell my 3rd copy for a 10 spot honestly.