burtonja Posted on August 15, 2012 Posted in Events, How to Play 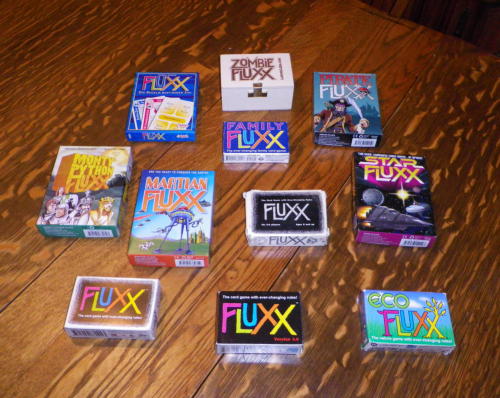 How about a nice game of Fluxx?

What is it?: Fluxx is a card game developed by Looney Labs wherein the players try to achieve a goal that changes as play goes on.

On a scale from Preschool to Post-Doc, how hard is it to play?: The official age range is listed as 8 – Adult, but there is a Family version that says it’s appropriate for ages 6 to Adult.

What will it cost me?: At the moment, the basic Fluxx deck lists at $16, but if you shop around you can find some good deals as low as $8.

How many can play?: Officially, 2 – 5 players. As always, three is the more fun minimum number of players, because with two people there is only the other person to play cards on and that can get dull. We’ve played with a few more than five, but I’d think beyond eight would be difficult to manage.

How long does it take to play?: Officially, 5 – 30 minutes. I’ve played the five-minute game; it’s pretty anticlimactic and more like a misdeal than an actual game (except for the person who won on their first play). Thirty minutes is a good top-end estimate; I don’t think I’ve played too many games that went much longer than that and usually they clock in at around 15 minutes a game on average.

What do I need to play?: A Fluxx deck. My deck is Fluxx 2.0, while currently they are running with Fluxx 4.0. For this How To, I’ve picked example cards that have survived through to 4.0 and some Promo cards that are fun (the basic set cards will be on the left, the promo cards on the right). The wording on my cards might be slightly different than what you would get in a freshly purchased Fluxx deck. You can also branch off into any of the other themed Fluxx decks (Cthulhu, Oz, Star, Pirate, Martian, Monty Python, Zombie, Eco, Family, Fluxx in German, Japanese, Español and Dutch); they all play pretty much the same.

How do I play it?: Deal out three cards to every player, then- 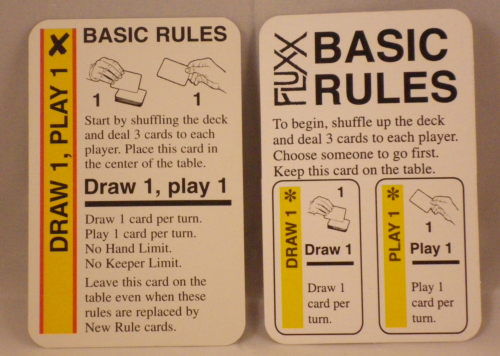 Draw a card, play a card. This is the basic Rule of the game and whenever you reset to the basic rules, it will be this card. (It has a noticeably different back to it so it can be easily identified. I’ve included two variants because some decks might still have the old school rules as pictured on the left). Astute gamers will note that at this point there is no winning criteria. This is true, but there are four different card types that direct the play of the game. 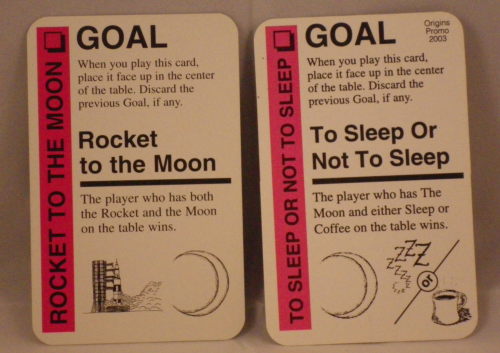 Goals (pink) are the criteria for winning the game. Fluxx 4.0 has 29 Goal cards, which can be played by any player in turn if they happen to have one in their hand. The winning criteria can change quite a lot during play and it’s even possible to win out of turn. 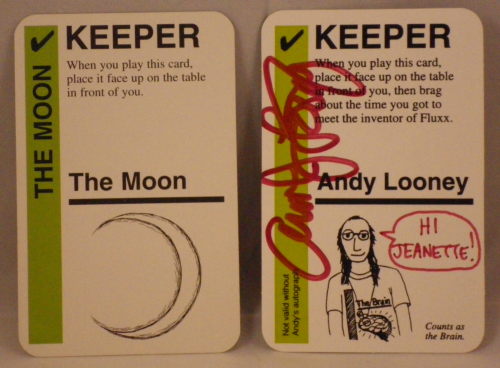 Keepers (green) are (for the most part) the cards that help fulfill the winning criteria. When a player plays a Keeper, the card is set aside somewhere on the player’s play field to “keep” in hopes that eventually there will be a combination of Keepers that satisfies a goal. 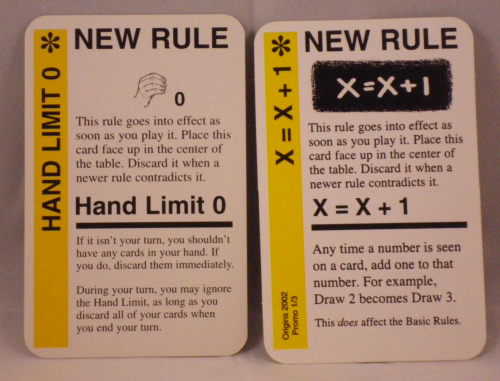 New Rules (yellow) are what shape the play of the game. Once a New Rule is played, it stays in effect until cancelled by another card or superseded by a similar New Rule (there are variations of hand and Keeper limits, as well as draw and play cards). It is possible to have up to 14 (!) different Rules in play on the basic Fluxx deck, but most players I know start wishing for one of the culling cards at around six or so Rules. 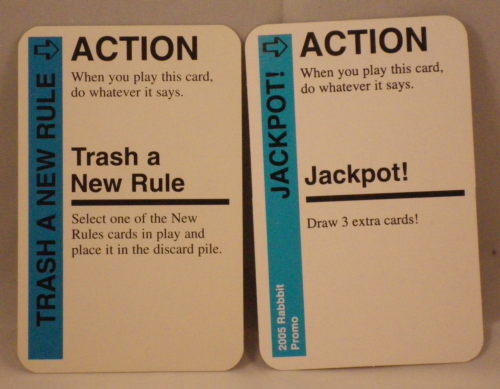 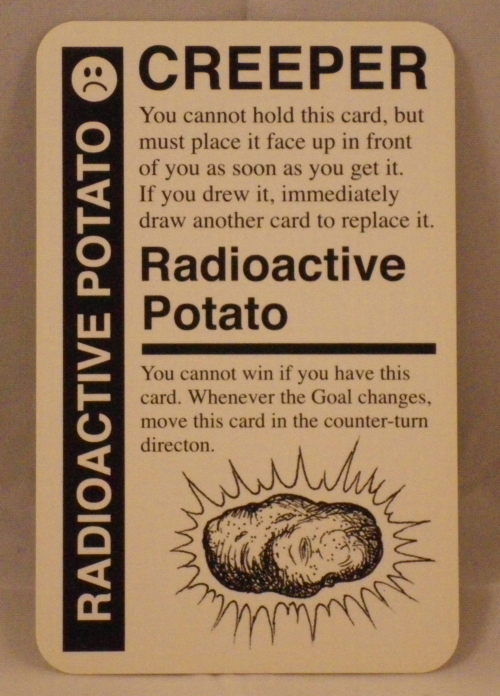 Creepers (black) are cards that, for the most part, hinder a player’s chances to win (most Creepers cards say that a player may not win if they possess any Creepers, although there are a couple Creeper-specific Goals). Creepers stay with a player until they can get rid of them, by either the action of a specific Creeper, or another card that allows the player to get rid of a Creeper. When a player draws a Creeper, they put the card immediately in a place in their play field and draw another card to replace the Creeper. This is also true for any Creepers dealt in the initial hand; place the Creeper(s) in the play field and draw to replace. 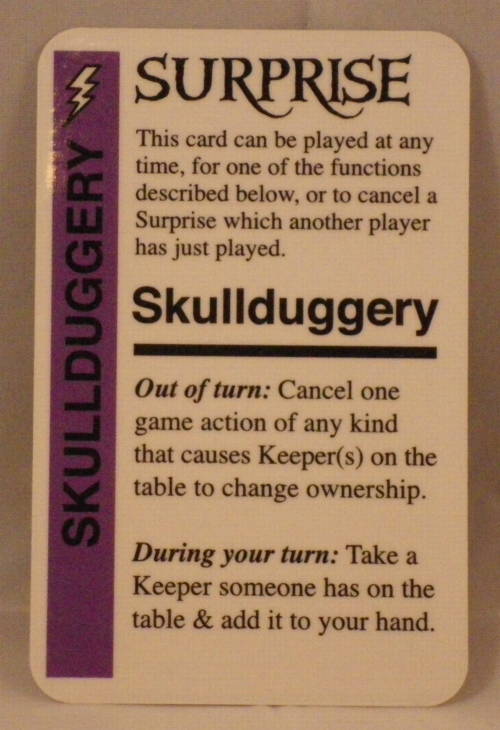 Surprise (purple) are cards that can be played on a player’s turn or out of turn. The basic set doesn’t come with any Surprise cards (*yet*), but Pirate Fluxx and later decks do.

Play is pretty easy. The instructions are written right on the card and are easy to understand. 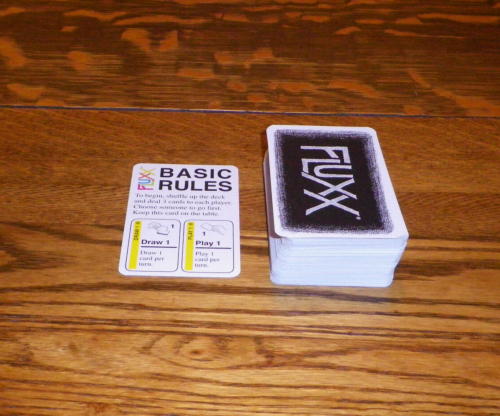 Initial set up: Basic Rules and draw pile. Kevin, Amy and I are the models for game play and we are playing with a Zombie Fluxx deck. 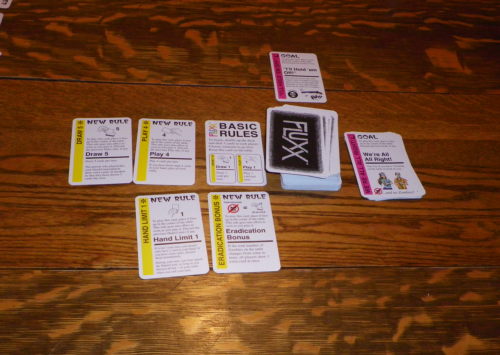 Draw pile with several rules out. Note that when the Hand Limit Rule is played, every player (who is not currently playing their turn) must immediately discard down to that number of cards in their hand. This move is rarely appreciated by the people who did not play the Hand Limit Rule. 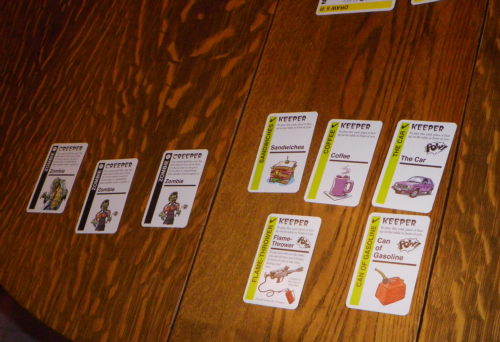 Player’s field. Kevin sets his field up in one line of Creepers and Keepers. 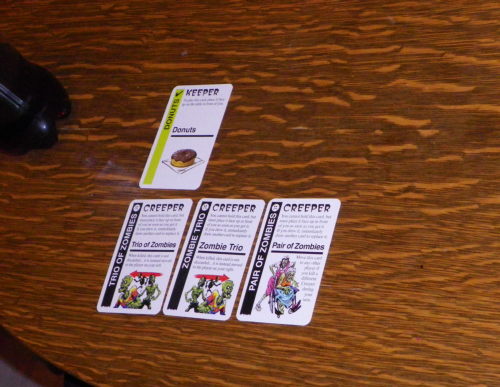 Amy likes to have her Creepers and Keepers off to the left, I prefer mine to the right with Creepers on top. Whatever is more comfortable is the best set up. 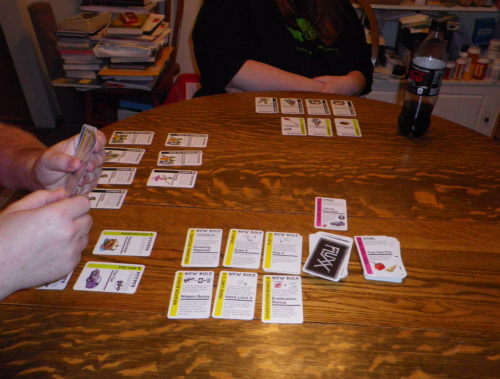 In Media Res. The Goal that is currently out is “I Alone Survived”, which requires that you have the car and no Creepers. Kevin has the car but he also has Creepers and can not win. I might have played this card a couple hands ago just to taunt Kevin. 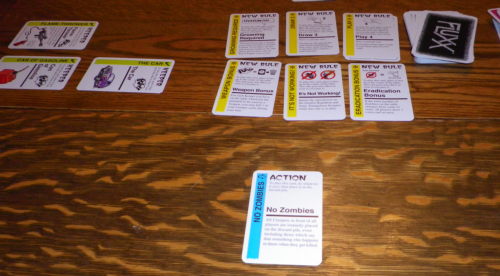 The win. I drew and then had to play the card that allowed Kevin to win (the “Play 4” New Rule was in effect which, given the “Draw 3” New Rule is also in effect, meant that all the cards in my hand were played. Including the “No Zombies” Action card. Whoops). Karma – but more to the point, this illustrates that you don’t have to actively pursue a goal to win.

Would you recommend this game?: This is a fun, fast, easy to learn game that doesn’t require long-term strategizing. Things can get crazy (see Rules cards above wherein it is possible to have 14 different Rules active at once) but there are also cards which will let you calm the chaos (Rules Reset, Trash a Card). There are even winning criteria involving the Creepers so it is not necessarily a bummer to end up with a Creeper or two. On some of the themed decks there are humorous genre jokes (“I hear Tallahassee is nice this time of year!”) or appropriate-for-the-genre Actions (talk like a pirate or outrageous accent).

Looney Labs is very proactive with their whole line of Fluxx decks and has been tweaking them over the years. They’ve rolled in awesome promo cards as part of the basic set (see X=X+1 which is now called “Inflation”), or invented new card types (see Creepers) that change the dynamic of the game. They have also dropped cards that don’t work as well or revamped an entire deck (I hear the original version of Stoner Fluxx was a little lackluster but subsequent re-imaged decks are better).

You can frequently pick up certain Promo cards at conventions where Looney Labs has an official presence or you can buy them from their site, just in case you want to spice your deck up a bit.

Family Fluxx. Don’t be jealous of the Grandparents; there is a similar card for children too.

Zombie Fluxx – notice the addition of the Creepers.

Monty Python Fluxx – I once played a game where we continued to speak in an outrageous accent even after the New Rule was trashed. It was kinda fun.

Martian Fluxx – You play the Martians so all the humans are Creepers.

Star Fluxx – I borrowed this from some friends so this was the first time I got to look through the cards. This deck is full of spacey references; it was really hard to pick representative cards.

German Fluxx – The New Rule card is “Double Agenda” where you can have two Goals. Possibly my second favorite Fluxx card after “X=X+1” or “Inflation” as it has been renamed. Also, notice that the Germans have milk and cookies for breakfast.

Another interesting trivia bit is that all the sets have different font types so you can tell them apart. You know, just in case you happen to be writing up a How To Play piece and have pulled cards from all the sets. Or if your Fluxx decks fell off their shelf and co-mingled in a giant Fluxx 52(plus) pick-up.

Login and submit your events!