What’s a New Player to Do? 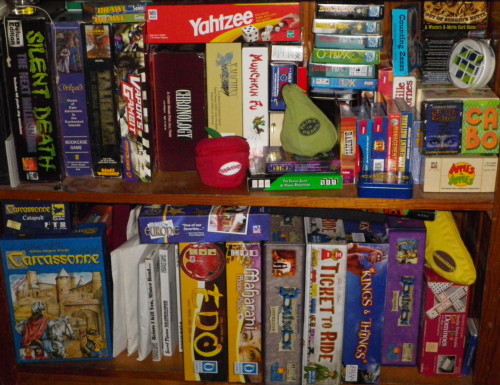 While looking at comics you might have noticed a flyer in the shop for this U-Con Gaming Convention and thought, “I like games, maybe I’ll check them out.” Or perhaps your friend, spouse or neighbor has been going to this gaming convention for years and said that you should come, you’ll love it! It could be that you’ve heard of U-Con vaguely through the years and decided this is the year you are going to attend. Whatever the reason, you’re new to the convention, or gaming in general and you’ve decided to jump into the foray.

Great! Where to start though? Hmmm. There are a LOT of things to choose from in the events list. It’s almost overwhelming!

First of all, may I recommend purchasing the $15 “Play Games all Weekend” ribbon? It seems like a bit of cash to drop on top of the registration costs but for someone new to gaming it does two neat things. It allows you to sit in on most scheduled events and play without registering specifically for the event (provided it hasn’t sold out already to people who have purchased specific tickets for the event). It also won’t lock you into a specific event like a ticket would, so you can “smorgasbord” (or “buffet” if you prefer) the events and have the freedom to drop in on something that sounds interesting.

The other neat thing the “Play Games all Weekend” ribbon does is let you check out games from the U-Con games library or play games in the Mayfair Games room without spending a generic ticket to do so. Both places have copies of many of the games being run at U-Con and both places are staffed with people who would love to sit down and explain the rules of the game and play a hand/round or two with you. This way you can familiarize yourself with the games and decide that maybe Fluxx isn’t your thing or that Settlers of Catan is the best game since the dawn of time.

So what games to play? Even if you pare down the events to the 1-A or 1-B categories (No experience needed – Involves little to no strategic thinking and is mostly luck based, No experience needed – involves a little strategy and some luck) there are a lot of choices. So here’s a short list of Games for New Players.

Board and Card Games:

Settlers of Catan (1-A). I admit straight up that I have never played Settlers, however in every description of Giant Settlers of Catan (run by Mayfair games) it says “Rules will be taught for newcomers!” Settlers is very popular and giant Settlers just sounds cool. In fact, I think I’ll drop in myself and learn to play.

Formula D (1-B). Michael Cook is running a series of Formula D events and although he says it uses advanced rules, he also mentions that he is willing to teach new players.

Pandemic (1-B). Amorphous Blob Games will teach you how to play this cooperative game about fighting the rampant spread of global infection.

Fluxx (1-A). It’s got the simplest set of rules I know of (draw a card/play a card), yet as you play the rules and the goals change. I’ve also never seen anyone stop and confer with the directions because the cards tell you exactly how to play them and what they do. You can jump into this game with no previous experience and do just fine.

Ticket to Ride (1-A – board game): This one takes some explaining to get you off and running but the Puffing Billy team is really good about teaching the basics. The mechanics are easy enough that I was tournament ready in just 15 minutes. True story! Mostly.

Are You a Traitor? and Are You a Werewolf (1-A). These are similar games and although they aren’t exactly card games, and not quite role playing games, they are very interactive games. Players are randomly assigned roles and then through discussion and sometimes (make believe) bloody mayhem, try to decide what role everyone is playing. Are You A Traitor has a more point-based dynamic, while more people will get mauled or lynched in Are You A Werewolf?.

Role Playing
If you have no role playing experience behind you, this category is not a great one to jump into. Most systems have pretty complicated mechanics and you can’t have any fun experiencing the game if you are worried about remembering which stats to add for opening a door or what die you use when. That said, here’s a couple of suggestions.

Plot Luck (1-B). I’ve played in a couple of these LARPs (Live Action Role Playing to the new) and if you can read a character summary and act true to that character’s motivations and goals, you can play. Scott Rutter and Anne Moore do a fantastic job tag team running these and if you tell them that you’ve never played before they will pick a suitable role for you.

New Fire (1-B). The game designer will be on site running these games, which are governed by a rules system he invented. In this case, no one (but the designer) will know how to play, putting most everybody on the same footing. I can’t guarantee it will be simple, but I’m pretty sure there will be some explaining involved. Besides, you can talk to the fella who invented it, which is kinda cool.

It Came From the Late, Late Show (1-A). If you like bad movies this will be quite a lot of fun to play because instead of the usual fantasy fireball-throwing Gandalf figure, you play an actor in a B-movie. Can you outrun the slime from the basement? Roll a die against your RUN score and if you succeed, yay! If not, it’s time to call in the STUNT DOUBLE to soak up the slime damage. (Amusing set of rules here)

Special Events
If nothing appeals on the games roster or if perhaps you need a break from playing, there are a couple events in the “Special” category I’ll mention.

Smithee Primaries (1-A). If you like B-movies this is absolutely the “between game breather” for you. The Smith-ka-teers gather movie clips, sort them into typical bad movie categories and then the audience gets to vote on which is the worst. It’s a fairly segmented presentation so although it runs for 5 hours, you can come in and leave at any time. Of course I might be biased because I am one of the Smith-ka-teers.

Paint and Take (1-A). For the artistically inclined or people who just like putting paint on tiny figures. You might even learn some snazzy techniques from fellow painters…who knows! (Ribbons do not allow you into this event)

Costuming (1-A). This year there are several events involving costuming including a costume contest You don’t have to enter but I bet it’s a hoot to go watch.